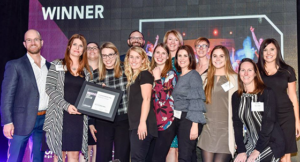 The Best of Awards is held annually by Colorado Meetings + Events magazine, celebrating more than 500 industry professionals from around the state.  These awards are designed to “honor the cream of the crop in the regional meetings and event industry.”  This year, the awards received more than 4,000 votes in 25 categories, where each winner was hand-picked by the magazine’s consumers.

Imprint was nominated and received its first award in 2009 for “Best Special Event Planning / Meeting Planning Company.”  Since its first nomination, Imprint has received awards in the following categories:

Imprint is proud to be named “the Best” this year among several other stand-out Colorado industry leaders – Kinsley Meetings, 5 Star Talent & Entertainment, Catering by Design, and much more.

Filed under: Colorado, Destination Management, Meetings and Events
Keep up to date with our social feeds all in one place